Parashat Terumah begins the Torah’s lengthy preoccupation of the construction of the Mishkan, the portable sanctuary that was situated at the center of the Israelites’ encampment on their journey through the wilderness. The Mishkan was where God’s presence, or Shechinah, dwelled among the people.

Numerous commentators have noted the connection between the building of the Mishkan and the creation narrative at the very beginning of the Torah. God instructs the Israelites to make the Mishkan just as God made the universe. The construction of the Mishkan, as Rabbi Jonathan Sacks notes, is “their first great constructive and collaborative act after crossing the Red Sea…Just as the universe began with an act of creation, so Jewish history (the history of a redeemed people) begins with an act of creation.” A series of verbal parallels underscores this connection:

The use of the same verbs in both narratives suggests that making the Mishkan was for the Israelites what creating the universe was for God. And yet the contrast between these two creation stories is notable. God’s creation of the universe takes 34 verses in Genesis (chapter one plus the first three verses of chapter two), while the making of the Mishkan takes hundreds of verses and spans five Torah portions. The lengths of the narratives are in inverse proportion to the size of the project–our vast universe compared to a small and modest portable sanctuary! The answer, of course, is that “it is not difficult for an infinite, omnipotent creator to make a home for humanity. What is difficult is for human beings, in their finitude and vulnerability, to make a home for God.” (Sacks)

The Mishkan is our first holy space. It is kadosh, holy, set apart. It serves as the prototype for the Temple in Jerusalem, as well as for the synagogue. We are enjoined to treat it and to behave in it with respect, and to care for it.

In these days, perhaps more so than ever before, we must consider our entire universe as kadosh, as holy space, as well. Our world is a precious gift. The natural order is what enables us to live and sustains us. We have to treat it with care and respect, as we do our Mishkans, our sanctuaries. Sadly this has not been the case, and we are beginning to see the costs of our neglect and failure to live up to our obligations. And alarmingly, our new president and administration speak and act as if they are oblivious to the consequences of our neglect.

Two creation stories. Two sacred spaces. One divinely created and vast. The other a human product and quite small. Both worthy of and dependent on our respect and care. All of us, and especially those with the power to decide whether our country will be part of the solution or part of the problem, would do well to heed the message of a powerful midrashic warning based on the first creation story: As the Holy One takes Adam through the Garden of Eden God tells him, “I created all My beautiful works for your sake. Take heed not to corrupt and destroy it. For if you do, there is no one to make it right after you.” (Ecclesiastes Rabbah 7:13)

Michael Swarttz, Schechter alumni parent, is the rabbi of Beth Tikvah Synagogue in Westborough and the Jewish Chaplain at the Phillips Academy in Andover. 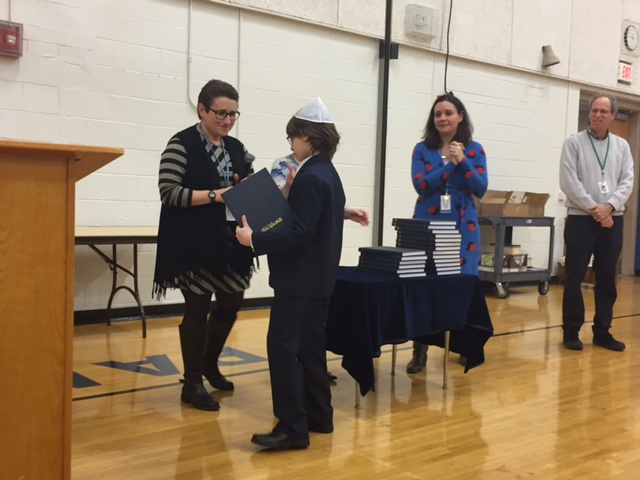 Fifth grade students and parents enjoyed an interactive Shiur B’Neviim, which celebrated the transition from the formal study of Humash (The Five Books of Moses) to studying Neviim (The Prophets).  Together they analyzed text from Chapter 1 of Joshua, discussed the challenges that Joshua faced replacing Moses as leader of a new nation, wrote journal entries from his perspective, and created maps showing how the land was to be divided amongst the twelve tribes.  To conclude the program, the children each received their own tikkun, a book used to prepare for Torah reading, as a gift from the school in memory of Deborah Kaplan Phillips (z”l), whose three children are Schechter alumni and whose grandchildren currently attend the school.  What makes this gift even more meaningful is that Schechter fifth graders learn how to chant from the Torah as part of their tefillah study.

How important is it to be honest?

It’s VERY important.  It’s so important that not one but TWO out of the Ten Commandments, contained in this week’s parashah, speak explicitly about the importance of honesty.

The third commandment is: Don’t take God’s name in vain. We shouldn’t say, “I swear to God that X is true” — if X isn’t true. When we swear that something is true and it turns out to be false, people learn not to trust us. Let’s say that we boast that we’ve behaved badly. Then, when we’re asked about it, we deny that we ever behaved that way.  We must be lying, right?  Another example:  we shouldn’t ever make a promise that we have no intention of fulfilling.   If we do, others may rely on it, and come to expect its fulfillment, and be disappointed when that doesn’t happen. And they’ll be disappointed in us.

Then there is commandment number nine:  Don’t bear false witness against your neighbor.  This is a terrible thing.  As the Book of Proverbs puts it, God hates “a lying tongue … and a false witness who breathes out lies.” (Proverbs 6:16-19) Again, in addition to harming others, this places our own integrity in jeopardy.

In both cases, one thing is certain: lying can hurt others, and it can hurt us, too.  If we lie, people will come to doubt our word.  They’ll never know whether we’re telling the truth or lying.  Every time we speak, they’ll wonder whether we’re lying.

We can learn the importance of telling the truth from a lovely midrash on a text that appears later in the book of Exodus.  When Moses is told to create the ark of the covenant, he is told to coat it with gold, inside and out.  That puzzles the rabbinic commentators: They can understand why it should be coated on the outside.  After all, people will see the outside. The ark will look special if it’s coated with gold on the outside.  But why bother to coat the inside with gold? No one looks inside! No one will know the difference!

The answer is simple: When the ark is coated inside and out, it serves as a symbol of the kind of people we should strive to be: people of integrity, people who are honest, whose word matches their deed.  In other words, people whose insides match their outsides. (Yoma 72b on Exodus 25:11)

Let’s strive to fulfill these two, very important commandments. Let’s strive to be real, sincere, and honest, and let’s strive to tell the truth.  Let’s try our best to be people about whom others will say, “Their insides match their outsides.”

In this week’s Torah portion, Beshalach, the Israelites escape from Egypt across the sea. After the escape, the Torah says, “And Israel saw the great work which the Lord did upon the Egyptians; and the people feared the Lord, and believed in the Lord, and His servant Moses.” Then, the Torah immediately recounts, the Israelites burst into song. There were many miracles the Israelites experienced both before and after this moment. Why did they burst into song then? According to Rabbi Yisrael of Rizhin, “It was not for the miracle of the splitting of the sea that they sang praise of God, but because the splitting of the sea brought them to perfect faith in God – ‘they believed in God’ – and that is why they sang.” Song as a by-product of faith is a fascinating take on the situation. The joy of knowing you have faith leads to artistic expression and celebration.

At Ramah, we believe that the arts are a compelling entry point into Jewish expression. That is, we can engage kids with Judaism through art which leads to deeper exploration and growth. However, the idea that music is the result of the Jewish experience also holds true. One of the amazing things about camp is how much spontaneous singing and dancing happens. Similarly, Schechter also provides access to Judaism beyond the academic. The focus on the whole child and opportunities to shine in many different ways is critical to development. Perhaps, song is on the lips of campers and students alike so readily because at both camp and Schechter we have created a community that is so connected to God and Judaism. Our heightened spiritual involvement prompts us to burst out singing.  Now that’s joyous Jewish living at its best! 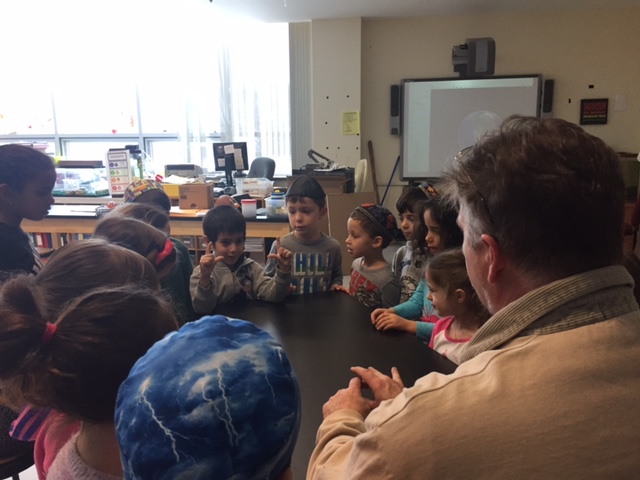 Lower Division Science Specialist Steve Lechner kicked off the week with a lesson in Super Bowl Science. Steve set up five different stations: Reaction Time, Field Goal, Momentum, Rolling Football and Google Earth, where students investigated various aspects of football. Students started with testing Reaction Time. To test this, one student held a strip of paper in his or her hand, while another student tried to catch the paper as the first student dropped it. Next was the Field Goal station, where students were able to measure the angle at which it is easiest to kick a field goal-close to the goal, far away, or somewhere in between. At the Momentum station, a metal ball was rolled down a ramp with a wooden block at the end. The students used different ramp angles to measure which one moved the wooden block farther. Students in the higher grades did some math, determining how many third graders it would take to equal the weight of the heaviest Patriots player along with other football-related math questions. At the Football Rolling station, students measured which way a football rolled farther, laying flat or on its end. Finally, students used Google Earth to find Gillette Stadium. Starting with the whole earth, they zoomed right into the stadium, as if they were standing in the middle of the stadium.