In this week’s Torah portion, B’ha-alot’kha, Miriam and Aharon talk negatively about Moshe’s marriage and express jealousy over who was the greater prophet. God rebukes them and Miriam is left afflicted with leprosy. Aharon begs Moshe to intercede on her behalf, and in one of my favorite Torah moments Moshe prays to God: “אל נא רפא נא לה” – “O God, pray heal her.”

There are two reasons why I love this. First, there is the juxtaposition of evil and good speech. Most gossip revolves around lengthy conversations that tear someone down. Moshe’s prayer of healing is short and to the point. The more we talk about others the more likely we are to stray into negative talk. Second, Moshe’s prayer is instructive. It is passionate, short and from the heart. There are definite times that praying as a community from siddurim with elaborately constructed poetry is important and meaningful. Still, we should also know that we can pray anywhere, anytime and with words and feelings that come from our hearts. I find that empowering and comforting.

Using speech for good and constructive purposes while staying away from negative talk is very hard. Very few people have mastered this ability. As both talkers and listeners we have a responsibility to strive to elevate our speech and use it to build others up.

Parashat Bemidbar (Numbers 1:1 – 4:20) lays out “marching orders” for the Israelites on their desert trek to the Promised Land. The nation is arrayed, by tribe, surrounding the Mishkan, the holy Tabernacle building.  The Mishkan is the people’s spiritual and moral center of gravity, housing the Aron (Ark), the Two Tablets, and the very presence of God. However, the same communal arrangement also serves, sadly, to marginalize Israelite women.  The tribal census (Numbers 1:2) only counts the men, relegating females to secondary status, a condition less than palatable to those of us committed to egalitarian principles.   Fast forward through the centuries, when the mobile Mishkan gave way to the 1st and 2nd Temples in Jerusalem as the sacred centers of Judaism, until all traces of those structures were nearly obliterated by Roman, Christian, and Muslim conquerors. Still, one small corner of the Temple complex, its Western Wall, the Kotel, endures as a place of pilgrimage and as a potent symbol of Jewish history and identity.  At sundown on Tuesday, May 23rd, Iyar 28, we celebrate Yom Yerushalayim, now 50 years since Jerusalem was liberated during the Six Day War. Emblematic of that liberation was the moment Israeli forces stood before the Kotel, after so many years of denied access. However, to my mind, the triumph is slightly muted so long as the Israeli Government, and the Rabbanut, can use the Kotel to keep women on the periphery. Torah Scrolls are not allowed in the Ezrat Nashim, Women of the Wall, and their supporters, are harassed, and the authorities seem to be reneging on, or delaying, the promise of a fully egalitarian section at the southern edge of the plaza.  Isaiah proclaimed that God’s House should be “a House of Prayer for all peoples (Isaiah 56:7).”  Yet, the imperative is unrealized.  I urge us to mark Yom Yerushalayim as a moment of collective strength and resilience, hope and optimism.  At the same time, let us endeavor to fulfill the prophetic aspiration for a spiritual center and sacred space that is inclusive and welcoming for the entire community.

David Bernat, PhD is the  Executive Director, Synagogue Council of Massachusetts  and is a Schechter parent and alumni parent.

This week we read the double portion Behar/Bechukotai, the last Torah portion in the Book of Leviticus.  The bulk of the portion Bechukotai is comprised of a list of blessings that the Israelites will receive if they follow God’s commandments in the land of Israel (rain, bountiful crops, peace, security etc.) and a list of curses they will receive if they fail to do so (drought, famine, pestilence, war, and ultimately exile).

A cursory glance at these two lists quickly reveals the disheartening news that the list of curses is far longer, more specific and more colorfully narrated than the rather modest list of blessings.  Such is the discrepancy between the two lists that the portion is commonly referred to as the “Tochecha” – the Rebuke.

In her brilliant “New Studies in Leviticus,” the 20th century Israeli Torah commentator Nehama Leibowitz notes that this notion that the curses far outweigh the blessings has sometimes been questioned. A midrash notes that first word of the blessings starts with an aleph (which opens the Hebrew alphabet), while the last word of the blessings ends with a tav (which closes the Hebrew alphabet), suggesting that the blessings include all good things “from A to Z.”  The curses, on the other hand, begin with a vav (6th letter) and end with a heh (5th letter), suggesting that just as there isn’t much between heh and vav, so too there isn’t much to these curses.

While Ibn Ezra’s argument, and the midrashists’ tricks with letters might seem a bit superficial to us now, they could be viewed as pointing toward a profound psychological truth.  How many of us spend more time focusing on the “curses” in our lives than on the blessings?  How many of us analyze and agonize over every detail of our mistakes and our shortcomings, while allowing our successes and our strengths to hover in the background, as vague generalities?

I’m reminded of an article I read last year about a study indicating that people who take a few minutes each morning to write down five things for which they are grateful, grow increasingly happy as they continue the exercise.  Perhaps our natural tendency is to leave our blessings unexamined—to assume that our blessings list is shorter than our curses list.  And perhaps our task (as Ibn Ezra’s reading might imply), at least now and then, is to linger on our blessings, to recount them to ourselves in all their beautifully.

And from the day on which you bring the sheaf of elevation offering—the day after the sabbath—you shall count off seven weeks. They must be complete: (16)

You must count until the day after the seventh week—fifty days; then you shall bring an offering of new grain to the LORD. (17)

This week we are in the midst of observing the biblical command from this week’s parasha to count the days of the Omer.   The Kabbalists added a trait from the Sefirot to each of the weeks. According to the Kabbalists, the Sefirot are the Emanations that reveal God’s presence.  In our home, each week of the Omer, I create a poster with a set of questions for the family to think about and discuss, related to each week, and trait.  I offer them here to you:

Week Three of the Omer
Tifferet:  Beauty
What have you noticed that is beautiful this week?
When have you shown inner beauty this week?
How have you brought out the beauty in others this week?

Week Four of the Omer
Netzah:  Endurance, Determination, Victory
What helps you overcome obstacles?  How can the family help you succeed?
What keeps you going when you want to quit?
What do you feel victorious about this week?  What are your successes this week?

Week Five of the Omer
Hod:  Gratitude
What are you grateful for this week?
How have you shown gratitude to others this week? 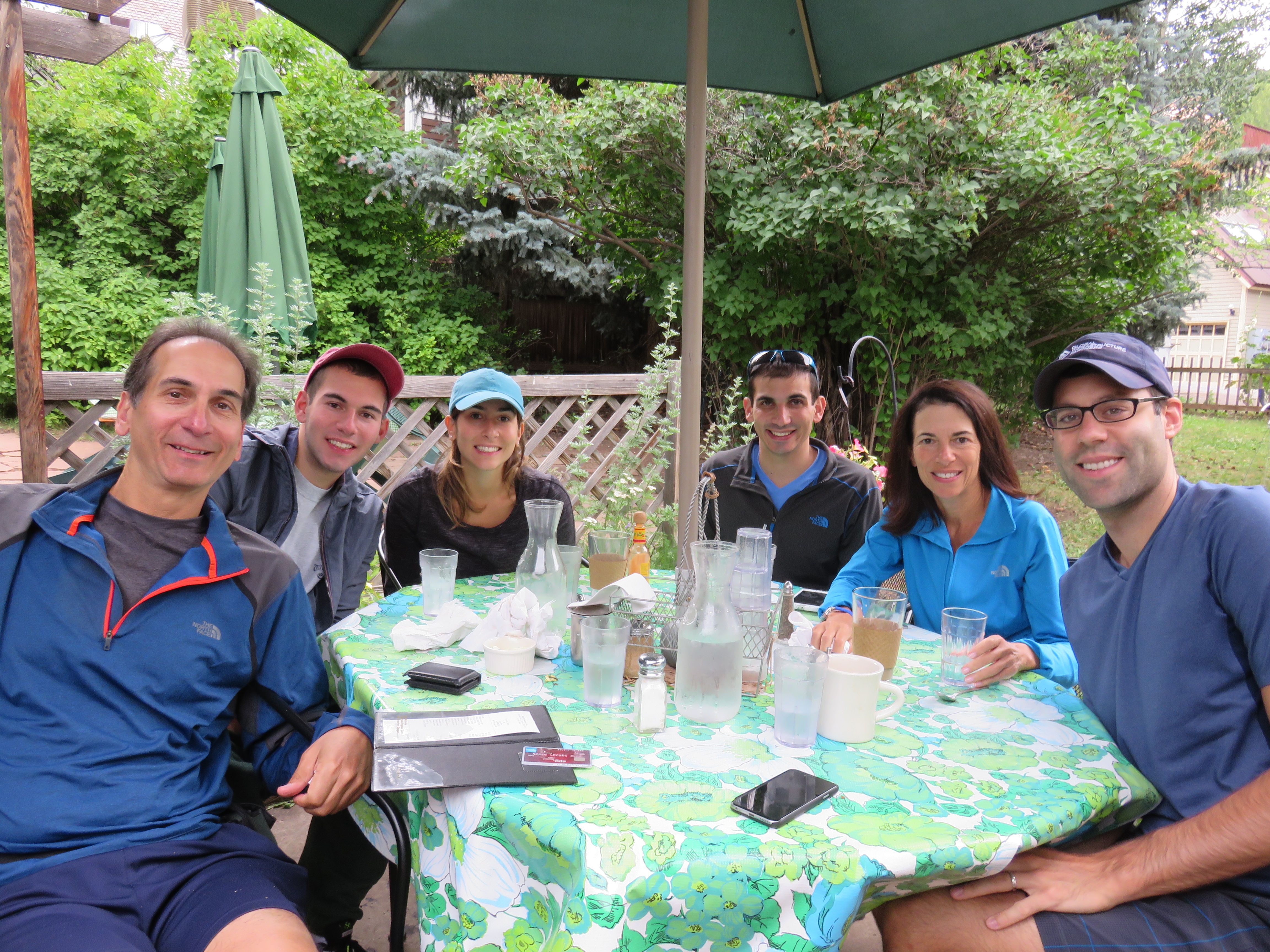 A note from alumni parents Elizabeth and Daniel Glick:

Our three children, Jamie ‘01, Josh ‘04 and Jeremy ‘08, all attended Schechter. The excellent education they received, together with Schechter’s emphasis on Jewish tradition, values and community, was unmatched.  Today, we witness on a regular basis the significant impact this education has had on our children as they have grown into independent adults, embrace Judaism in their everyday lives and are actively involved in tikkun olam (repairing the world) in their respective communities. Similar to those before us who made the exceptional Schechter experience possible for our family through their support and generosity, we too wish to help future generations benefit from the outstanding Schechter experience.  We are proud to give to the school’s Generations Campaign to ensure it maintains its exceptional, pedagogical model and remains accessible to all Jewish families in the future. We  are proud to have made a legacy gift to Schechter through its Generations Campaign to recognize the impact it has had on our family’s lives. We hope that many others will join us!